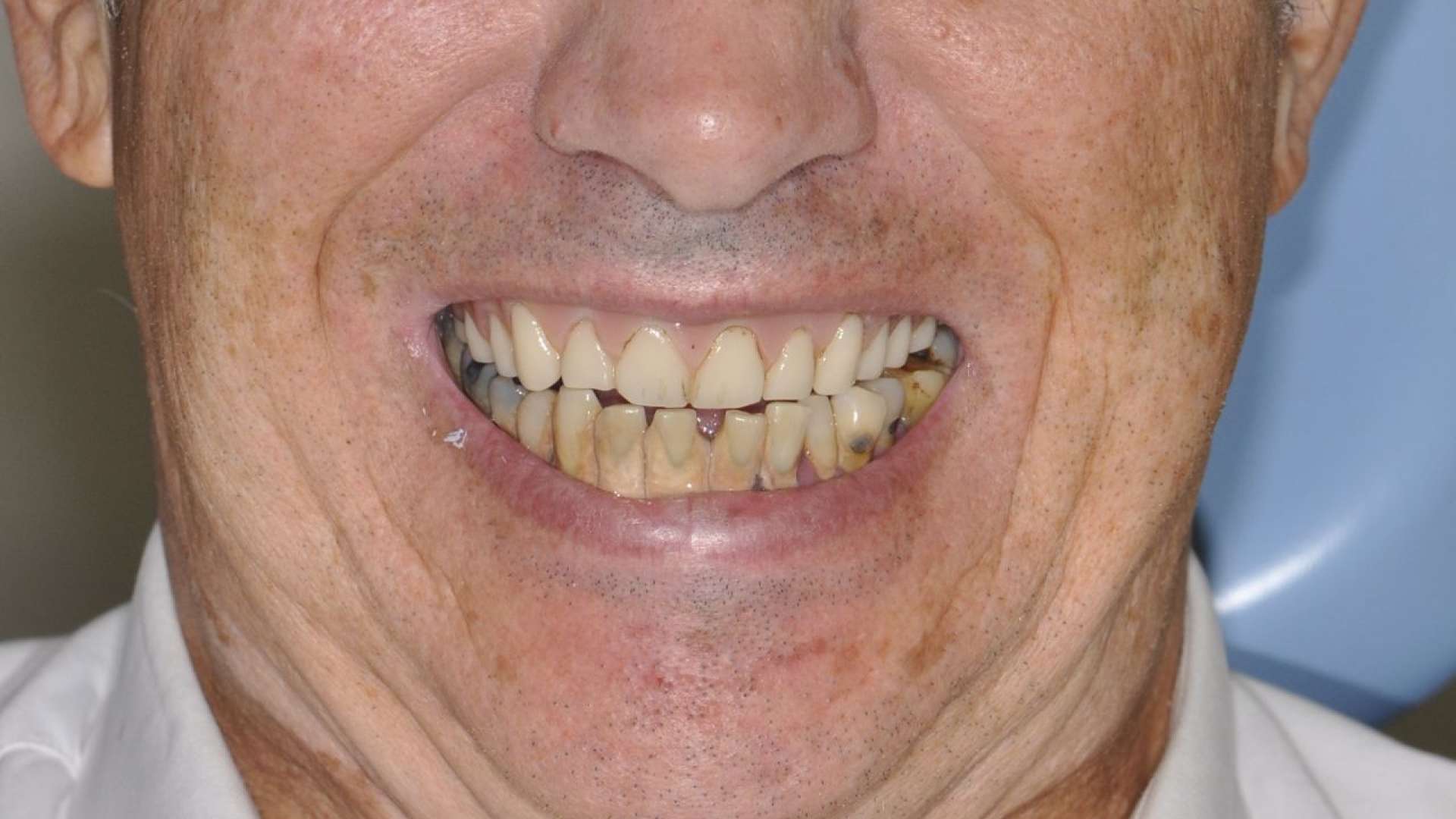 Dental Implants Retreatment with Zygoma Plus

Last night I reviewed one of my patients who I treated with the Zygoma-Plus technique, a method that I developed, borrowing from the traditional Zygomatic Implants and sinus grafting techniques, with some critical modifications. I presented this technique at the India International Dental Conference.

The patient is a successful businessman/entrepreneur, with a busy life and completely time-deprived. He lost his upper teeth in 2008 and received dental implants from his periodontist, who planned to maintain the natural lower teeth at the time with gum treatment. The upper implants were done using a traditional 2-stage approach, whereby the implants were fitted with locator abutments and supported a removable clip-on denture.

The periodontist who treated this case in 2008 is a highly skilled operator and an acquaintance of mine. The implants that were placed were done according to protocol at the time. The problem now was that the denture was loose and acted as a pump driving food under it. This caused irritation of the gums, speech problems, and loss of confidence for the patient because of the denture looseness. Along with the failing lower dentition and the extreme mobility of the teeth from untreated gum disease, the patient presented needing to do something urgently. He also wanted something that looks/feels better and non-removable.

Clearly part of the problem was his busy schedule and lack of attention to himself, a lack of hygiene. This can also be an issue going forward with any other treatment. Was it due to the inability to clean his teeth because of the design of his prosthesis, or unwillingness? Actually it happened to be a bit of both. In the upper, because of the inflamed gums around the fixtures, it was painful to clean, so he avoided that. Due to his busy schedule, he did not find the time to visit his dentist or periodontist regularly, but then it got so bad he was actually embarrassed to see anyone, until now because he was desperate. In his management plan going forward, it was important not only to educate him about the importance of hygiene, but also to provide him with something that is easy for him to keep clean. 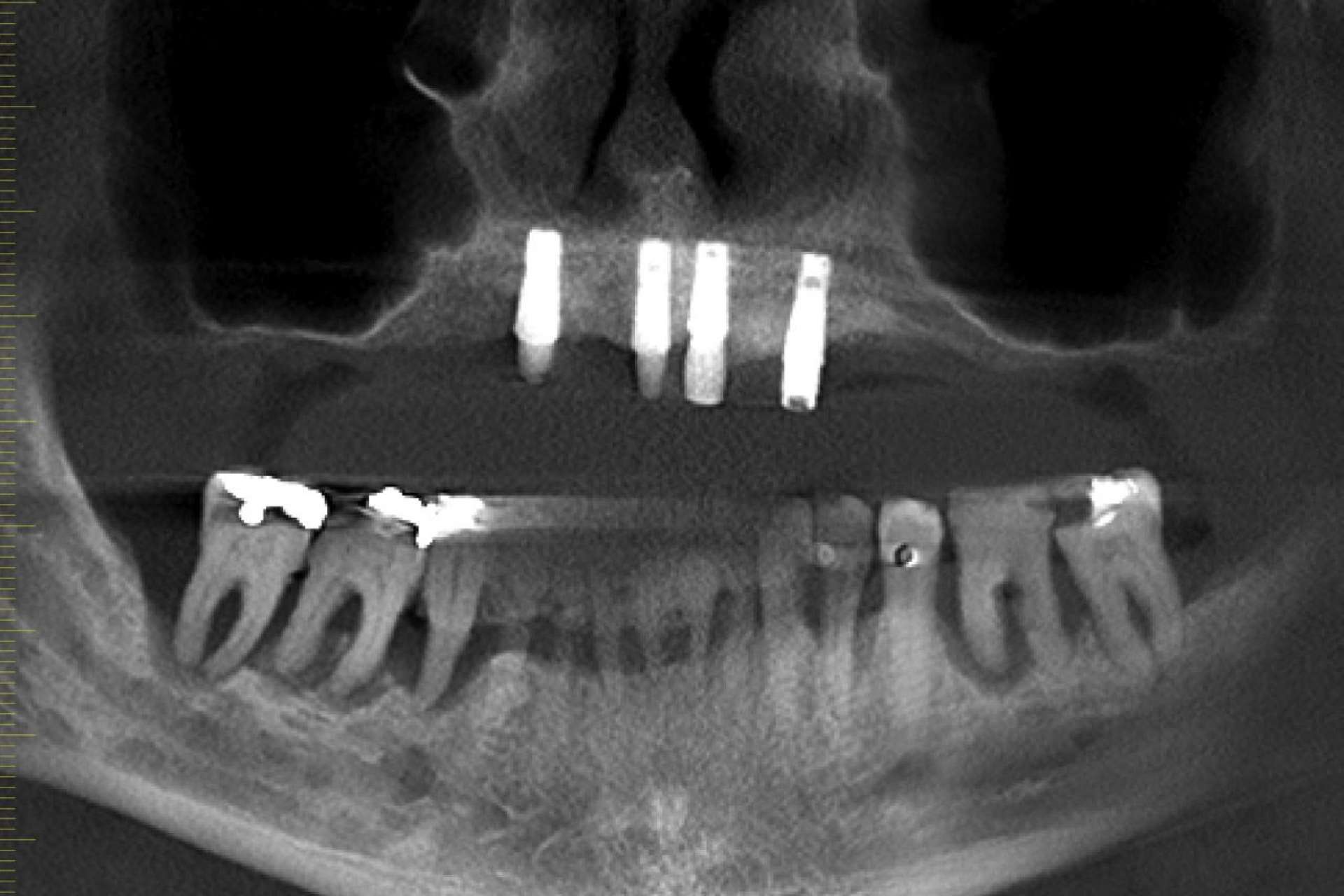 In the upper I faced a dilemma as to whether to save or remove the existing implants. I had to rest aside the fact that the periodontist was an acquaintance of mine, and wanted to make a recommendation that would be best for the patient. Saving the existing fixtures would save some money, which is always nice, but I had to take into consideration the following:

As it turned out, in our preliminary study we ascertained that the available restorative space was borderline but adequate for what we needed to achieve. There were procedures that I could use to improve the health around the existing fixtures, and to make the gum interface, the biotype, more stable. Nobel Biocare now make multi-unit components for All-On-4 to fit the Astra brand implants, so this problem could now also overcome this problem. 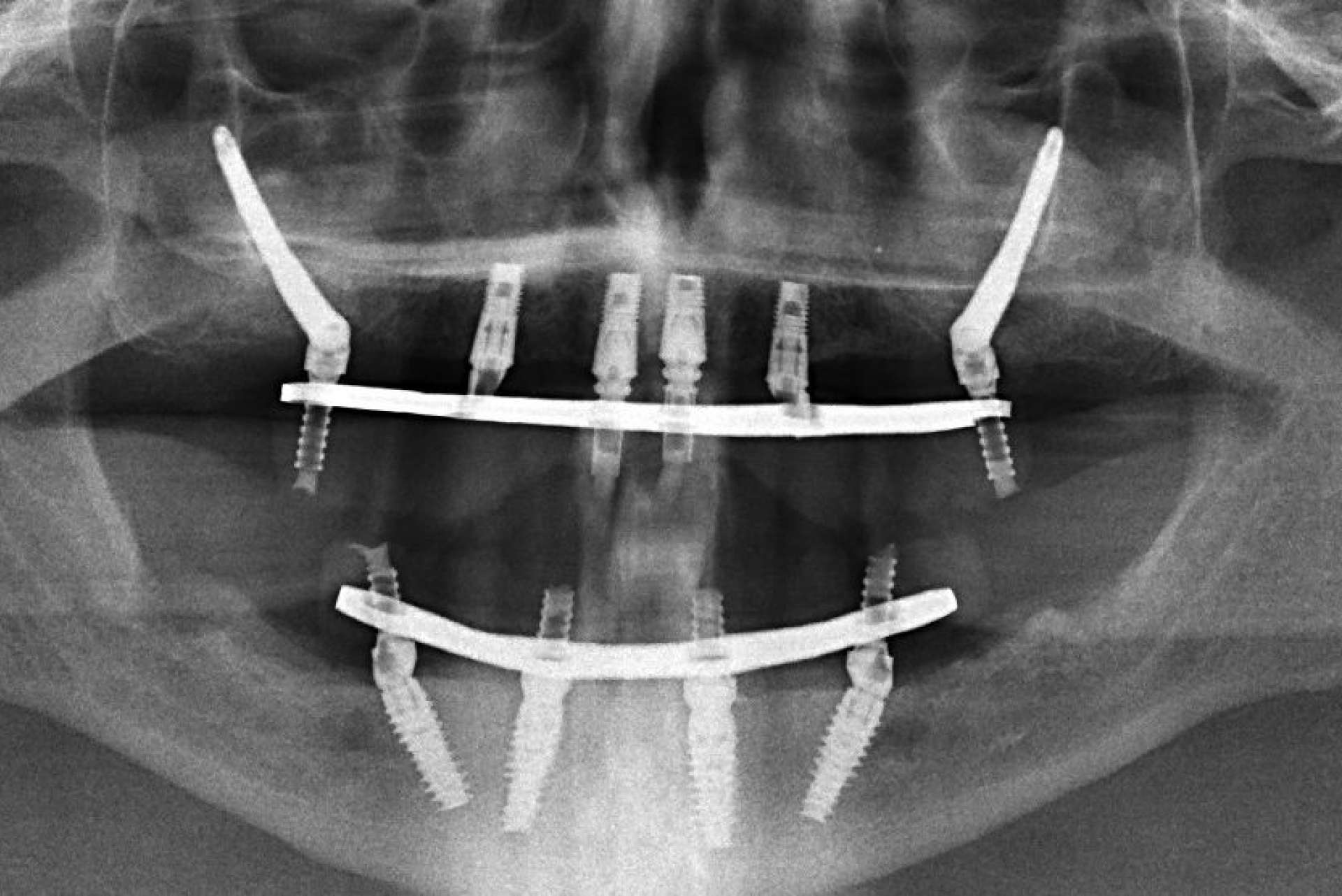 So I decided to preserve the existing 4 front fixtures. However, the bigger issue was that in order to fit a fixed bridge more support was required in the back, but the sinus spaces were highly pneumatised and there was no bone for standard implants. This is where the Zygoma Plus technique came in. By anchoring the implants into the underside of the cheekbone, along with the other procedures that I did simultaneously, I was able to achieve the required support for a fixed bridge.

In the lower I was able to perform a standard All-On-4 procedure. There was enough bone for that, it was a natural choice for his condition. 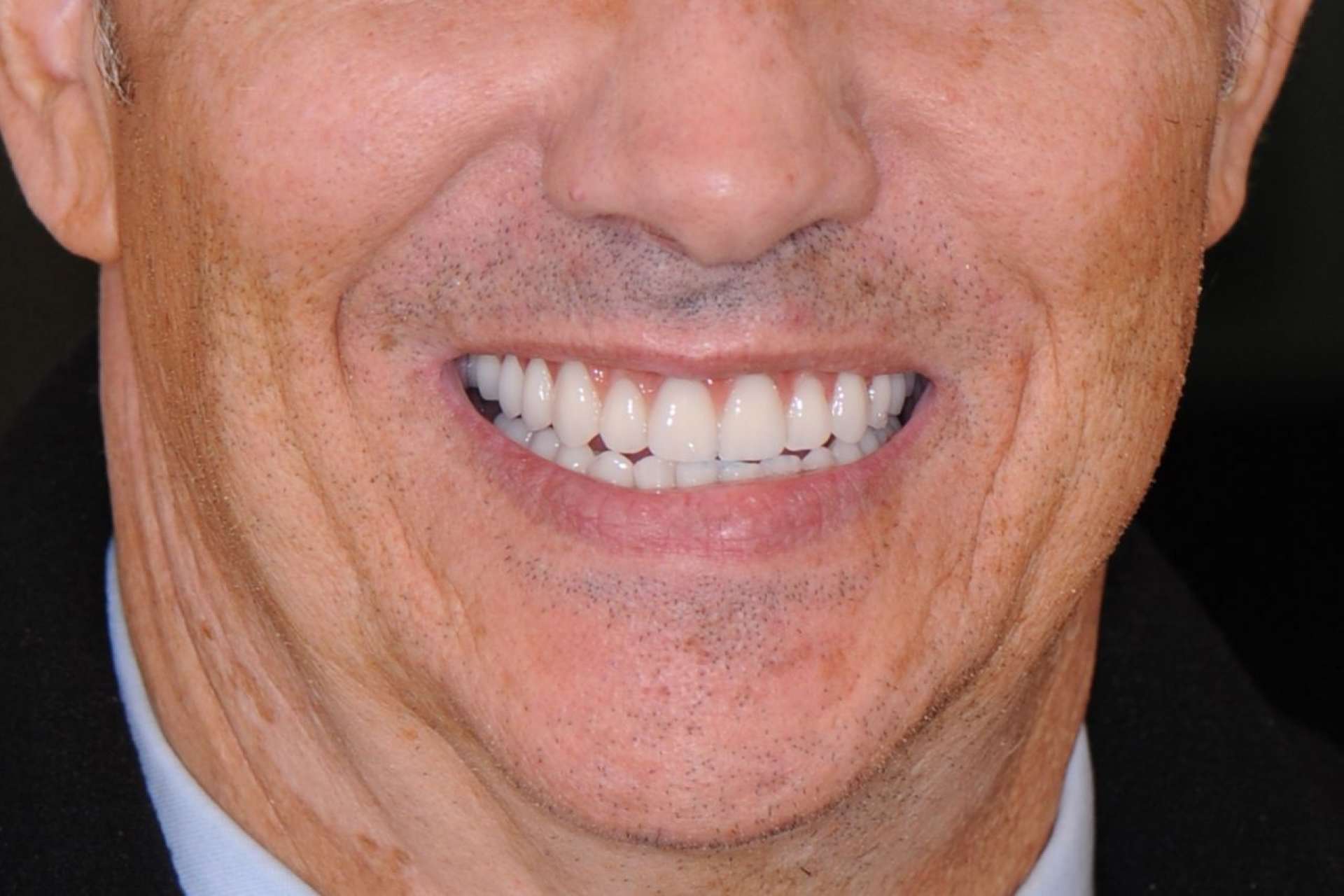 In the lower I was able to perform a standard All-On-4 procedure. There was enough bone for that, it was a natural choice for his condition.

The upper and lower surgeries were done together under a General Anaesthetic, and I was able to fit the final, permanent and fixed teeth the very next day. The design of the upepr and lower bridges mean that its easier for the patient to keep his teeth clean. Hygiene was a concern at the planning stage, but on review today, he demonstrated that he is both capable and willing to keep his teeth clean and protect his investment.

As per my standard practice, I sent an overview and images of my treatment to the original periodontist and he became interested in what I had done here. The traditional Zygomatic implants had numerous shortfalls. My reply to him summarises the Zygoma-Plus procedure and how it compares to the older methods:

With the Zygomas I've been using a modified technique for the last 2 years, which I call "Zygoma-Plus".

With the standard Zygoma method that I used in the past (where the tip is in the cheekbone and the collar is in the palate/alveolus), I had complications to do with oro-antral fistula and sinusitis, which others also experience and are complex to manage. But the main issue was hygiene because of the palatal emergence of the implant requiring a ridge lap over the alveolous, discomfort for the patient due to the resultant bulk, and inadequate restorative space and breakages. The newer alternative with extra-skeletal placement, in an attempt to reduce the palatal bulk and reduce chances of sinusitis and oro-antral fistulas, has a high propensity for buccal tissue dehiscence and all the issues that are associated with that.

The new technique that I use borrows from the old method of using Zygomatic implants in maxilectomy cancer patients, where the implant relies only on the zygomatic bone without any alveolar engagement of the collar. I do an L-slot sinus lift and line the space with bone graft, and then an alveolectomy (or sinus impaction alveoplasty where there is no alveolus for an alveolectomy), and then I am able to position the implant exactly where I want it for best emergence profile, flat hygienic underside, increased restorative space, and its intra-skeletal but sub-antral.

I’ve done about 250 of these and the complication rate has fallen dramatically compared to the older method, plus the obvious improvements to hygiene, comfort, etc. etc. But it is more technique sensitive, especially with quad zygomas, as good stability must be achieved without relying on bi-cortical stabilisation.

I’ve introduced the concept at IIDC earlier this year. Attached are a couple of the slides. 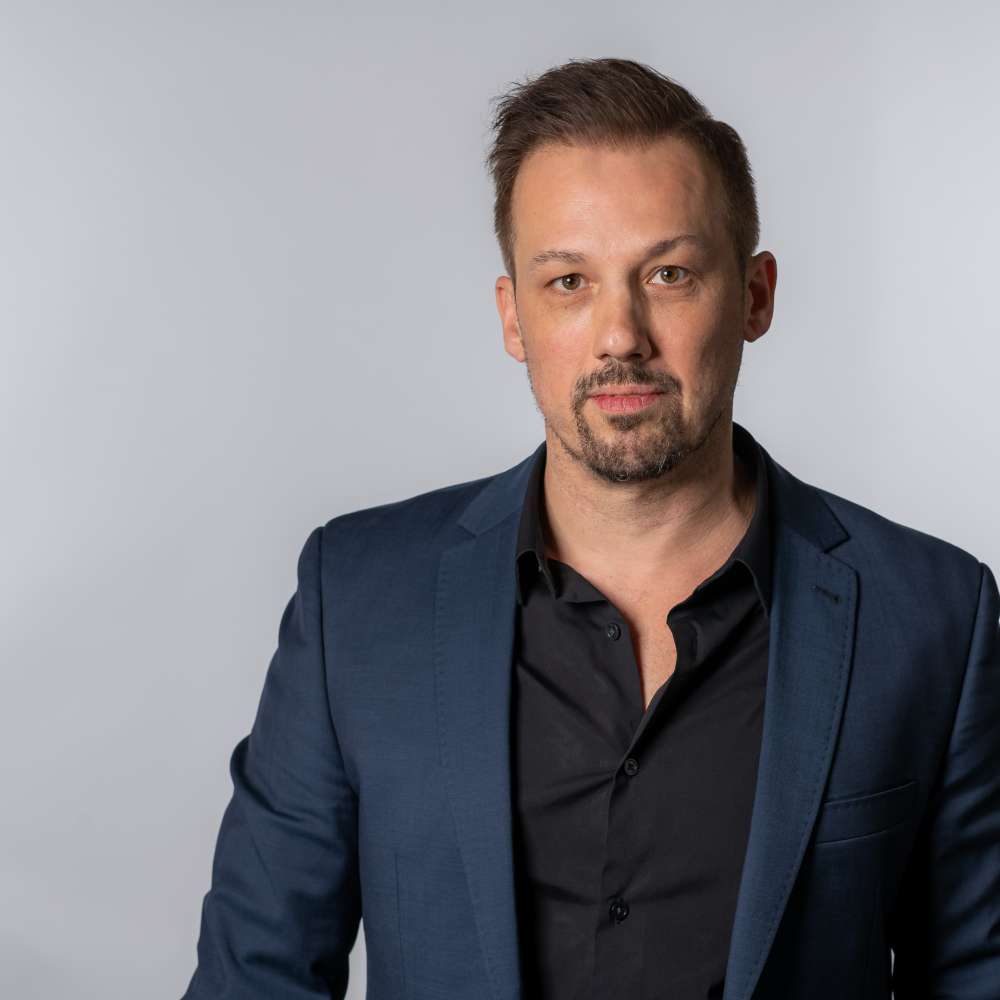 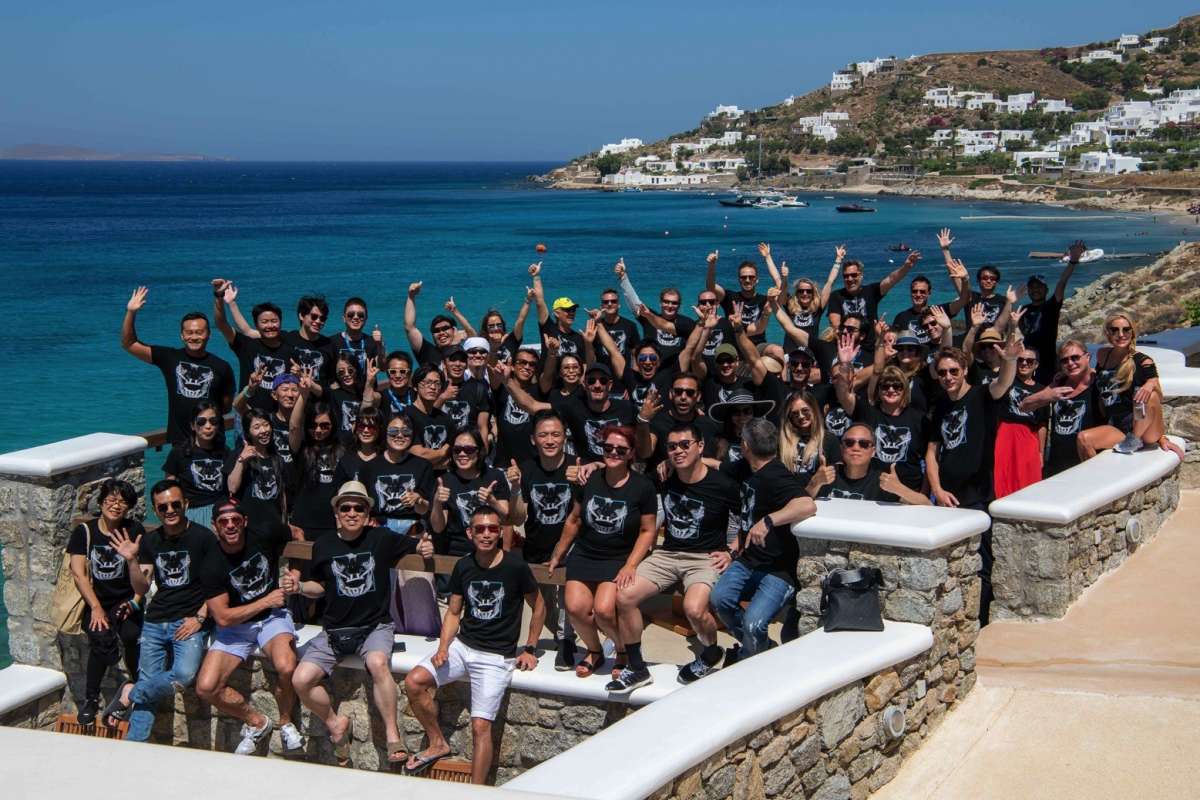 Sea to Summit 2022 The areas of Implant-based Oral Rehabilitation and Facial Aesthetics have been evolving simultaneously around the world. The concern is whether we can keep up with the pace of evolution in... Visit Event Website

The Pre-Terminal Dentition: Considering Dentures | PART 2
A DENTIST’S DILEMMA FOR HIS YOUNG PATIENT WHO WANTED DENTURES In Part 1 of this series I responded to a dentist’s dilemma about carrying out treatment requested by his young...
Continue Reading